Each year Screen International selects some up-and-coming actors and filmakers who will be everywhere on our screens in the years to come.

For their 10th anniversary, they released their new list of up-and-coming talent which includes two Game of Thrones alumni (Rose Leslie and Ed Skrein) and two Skins alumni (Freya Mavor and Antonia Clarke). 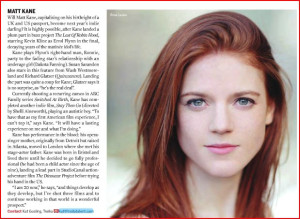 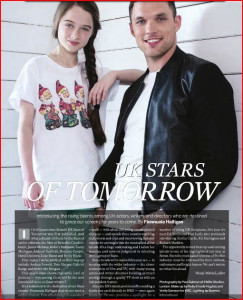 There's a little paragraph for each actor that you can read here
The list also includes Franz Drameh (Attack the Block),Luke Newberry (In the flesh) and Will Poulter (Son of Rainbow,We're the millers,the maze runner).

What are your favorite up-and-coming actors ? This post can also be used as an excuse to speak about Game of Thrones or Skins.
Misfits has had a somewhat troubled fourth series this year, with al the original cast now leaving. But recent episodes seem to have picked up rather nicely.

I went to see the premiere of a new Channel 4 series last night, Utopia, starring Nathan Stewart-Jarrett, Curtis from Misfits (the first review ran here) and while there got chatting with all sorts of people from the channel.

During which I learnt that there had been some internal concerns about the show, but that they believed the "second block" of recording, starting with the rabbit episode, was a lot stronger.

And also that Misfits has been renewed for a fifth series.

Of course who exactly will be in it, once Hollywood has strip mined the new cast for Game Of Thrones, The Hobbit or Pip Pip Mister Phillips! (London Style) as they did the last, I have no idea...

So there are rumors Misfits could get a movie.
Apparantly, Howard Overman wrote the first draft of the script and it's with the possibility of returning characters.

I don't really think that it will involve any of the main characters. I'm pretty sure Robert Sheehan won't be back, as well as Lauren. And after seeing this interview, Iwan seems pretty done with Misfits, too, idk. :(

But I would love a movie with ALL of the old gang + Rudy, and ok, maybe Jess, but it seems really impossible that anyone of the old cast will say yes to this. And it's annoying, I really wanna know what the hell happened on the set that everyone is so damn indifferent to this perfect show. Yes, to me it's still perfect. :D 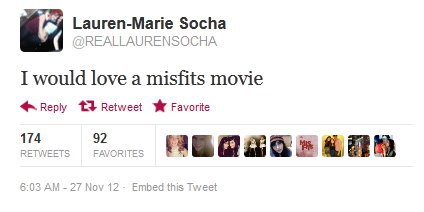 I'm guessing that if it happens, it will be about someone we don't really care about. Maybe Finn. Oh, the horror.

I found this on tumblr while reading a review for 4.02

For more samples, zips and a gallery link please see this post.
If it's SOMEHOW escaped your attention, we're back on Sunday at 10pm. And to celebrate, we're delighted to announce that creator Howard Overman and cast will be opening the MCM London Comic Con on Friday 26th October.

Show creator Howard Overman will be joined on the panel by cast members including the inimitable Joseph Gilgun, along with Nathan McMullen and Matt Stokoe who are joining the gang this series.

There'll also be exclusive clips from the coming series and some insider gossip and stuff. And as if that isn't enough, there will also be the opportunity to pick up a copy of the brand new Misfits book and get it signed by the gang! HELLLYEAH (you can buy the book here btw, too).

Here it is, trailer for the first episode!

The new season starts on Sunday!

There is a trailer for channel 4 autumn winter drama available on youtube which includes some scenes of misfits series 4 and utopia with nathan stewart.Enjoy !

Antonia Thomas shot to fame with her role on the British television show Misfits, now getting its first American run on Logo every Thursday night at 10/9 c, and we took some time to chat with the gorgeous 25-year-old about working on the hit show and her new projects. The first part of out interview will run today, free of any Misfits spoilers for all you new fans, and you can check back here tomorrow for part two.

Can you talk about landing the role of Alisha in Misfits? What the audition process was like and finally finding out you received the role.

I auditioned for Misfits while I was in my final year of drama school. I had just signed with my agent and they had started to put me up for auditions. When the Misfits audition came through I was rehearsing my final year play and was having to commute from Bristol to London to audition, and then get back in time for rehearsals (some of which I missed). I had around 7 auditions – it was an extremely thorough process and I was sure that I hadn’t got the job. It was so great when I found out that I had got it, I couldn’t believe it! I was very excited and very scared, as my drama school training had mainly been theatre based, and so the thought of doing a high profile TV job was very daunting. But I learned quickly and it was the best screen training I could have asked for, and the best first job!